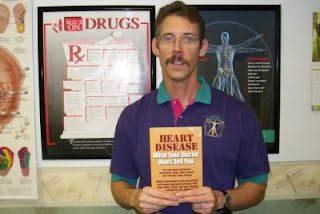 As a holistic-minded Chiropractic Physician, part of my job in the year 2011 is also to be a better detective than many Medical Doctors are. This also entails cleaning up some of the drug-induced messes that they create. Take STATIN drugs for example.

We had a patient several months back who had been on a statin (per his M.D.) for 5 weeks. This fellow was a once per month chiropractic maintenance patient in great musculoskeletal health. I should know since I've been caring for his spine for over a decade. So he now presented to my office with his right arm being almost totally useless. In fact, this muscular guy in his early 40's who normally chops firewood and hand delivers calves for fun, and who had no recent traumas could not even use his right arm to drive home from his workplace! My exam revealed nothing out of the ordinary. No musculoskeletal pain or tenderness at all! Hmmmm?

When I found out that he was taking a statin, I told him all of the things his M.D. hadn't told him. I then recommended he take CoQ10, a special kind of Vitamin E & Omega 3 fatty acids. He called the office less than 48 hours later to report that he had followed through on all of my suggestions & his arm was now 80% better.

Then 2 months ago, a long-time chiropractic maintenance patient in his 50's told me about a new complaint, which was in the area of left elbow tendonitis. Once again, a lack of pain or tenderness on exam led me to suspect his statin drug, which he had now been on for years. I gave him my same exact recommendations (see above). 1 month ago, his elbow was just as painful. It's a good thing that he stuck with my recommendations though, because when I last saw him, he reported that after 6 weeks of saying bye-bye to his statin drug along with taking Omega 3, Vit E & CoQ10 his left elbow was now 80% improved.

I could go on & on, but you're probably getting the idea by now. Statins do usually lower cholesterol by up to 50 points within a 6-month period. Other than that, in my professional opinion they are totally worthless to you as a patient. Of course they are definitely not worthless to Big Medicine & Big Pharma, since they make billions per year for these industries and are responsible for building entirely new cardiac wings on many a hospital.

We carry a book at Austin Family Chiropractic by Dr. Rodger Murphree. It's called "Heart Disease: What Your Doctor Won't Tell You". It's a $15.00 Must Read if you are one of those unfortunate souls who now finds yourself taking a daily statin drug.

BTW, all of the nutritional supplements that I mentioned are available at Austin Family Chiropractic in Virden, IL.