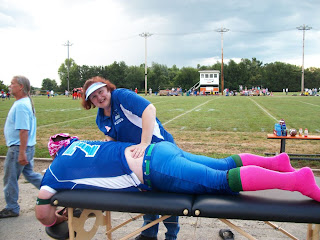 Photo caption: Eugena Austin massages a Foxes player's lower back prior to the Foxes vs. Thunder game. 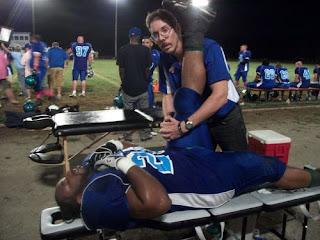 Dr. Todd & Eugena Austin are now the Official Healthcare Providers for the Springfield Foxes. Dr. Todd Austin and his wife Eugena Austin, both from Austin Family Chiropractic in Virden are staying busy on the sidelines this summer. That's because they are now the official Doctor of Chiropractic and Licensed Massage Therapist for the 2011 Springfield Foxes football team. The Foxes are currently in their 2nd season as a franchise. This season has brought about some changes. The Foxes are now in a different league, the Mid States Football League (MSFL) and they have undergone a change of venue currently playing their home games at the South Fork High School football field in Kincaid, IL. 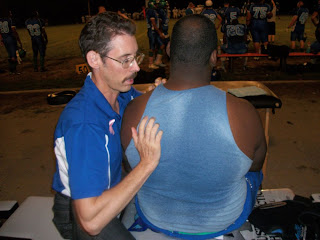 
The Foxes have 4 home games in Kincaid this summer. Dr. Todd & Eugena from Austin Family Chiropractic will be on the sidelines for all four contests. Dr. Austin has been a diehard football fan for 37 years. Dr. Todd is an Associate Member of the Professional Football Chiropractic Society. That organizations goal is to have a Doctor of Chiropractic available on the sidelines for ever American football team from the NFL all the way down to children's teams. The Foxes are actually a semi-pro team with the age of their players ranging from 18 to 36. According to Dr. Austin "I've always thought it would be an awesome experience to be a DC for a football team ever since I was a Chiropractic College student back in 1990. Now, I've been blessed to have the opportunity with the 2011 Foxes and I'm enjoying every minute of it!"

Dr. Todd has mainly been performing a lot of chiropractic spine and extremity adjustments as well as cold laser therapy to help reduce inflammation and improve range of motion more quickly. Dr. Todd states that "Through three games, I seem to be dealing with primarily shoulder and low back issues". Eugena has been busy massaging many low backs, calf muscles and hamstring muscles. Since the team doesn't have an athletic trainer this season, Dr. Todd and Eugena have also been handling some of the taping, applying ice packs, helping players to stretch out and applying Biofreeze pain relief spray.

The Foxes final regular season home contest with be at 7 PM in Kincaid on Saturday September 10, 2011. For more info, visit
SpringfieldFoxesChiro.com .